Lately we’ve been talking about a lot of great new features in the latest development trunk of WebKit – features like web fonts, client-side database storage, CSS transforms and CSS animation. These features will likely make it to an official release someday. But I’d like to take a step back and talk about some older features, namely all the great stuff in our recent stable release.

Apple’s site can tell you a lot about the new end-user features of Safari 3. But a lot of the goodness is on the inside, in the WebKit engine that powers Safari. Here’s a list of ten of the most exciting engine enhancements since the Safari 2 version of WebKit, with lots of details and demos. These features are all included in the WebKit that comes with Safari 3 – you don’t have to download nightlies or anything else to get them.

As you browse the web with a WebKit 3 based browser, you will get a complete and functional rich text editing experience on the new read-write web. Here’s a sweet demo of our improved editing support, just click the text and editing controls appear.

Specifically, we have worked together with developers of RTE libraries and applications to improve compatibility. WebKit 3 fixes many bugs, and supports additional text editing features like links and lists. We now have support from web applications like WordPress, Google Docs, GMail, Blogger, and many more. We’ve also improved editing to support libraries like TinyMCE and FCKeditor. We expect even more web apps and toolkits to add support over time.

If you try other JavaScript and DOM benchmarks on the web, you’ll see similar results – speedups of 2x or more. These are speedups you will really feel on advanced web applications.

WebKit 3 also offers significantly improved raw page loading speed. Unfortunately it’s hard to find good benchmarks in this area. The best we know of is the HTML i-Bench which is a pain for the casual user to set up, but which is based on real web content.

Some have argued that page loading benchmarks are unfair because browsers dispatch the load before painting, and Safari will sometimes even do it before the first layout. But the HTML i-Bench is one of the few tests to factor this out – it forces a layout and scrolls to ensure a paint. Here’s the numbers:

WebKit 3 features a major new technology – SVG (Scalable Vector Graphics). SVG is an XML markup language for graphics that allows rich interaction and which can be mixed directly with XHTML. Here’s some whizzy demos:

We haven’t profiled and optimized SVG quite as much as the rest of the engine, but early tests seem to indicate that it already has blazing performance. Look for this exciting new technology to see even more use on the web over time, now that it is supported by WebKit, the Gecko engine inside Firefox, and the Presto engine inside Opera.

Another major brand new technology in WebKit 3 is XPath, the XML Path Language. XPath is a W3C standard query language that lets web developers efficiently find particular elements in the document. Since XPath is a programming language, it’s hard to show a pretty demo, but this tutorial goes in depth and has a few examples. XPath is used in AJAX toolkits like TIBCO General Interface, and can be used by CSS query engines for improved performance, as in dojo.query.

In addition to the big new features of XPath and XVG, we have lots of new and improved XML technologies:

Here’s some older, more advanced examples for styleable text fields. On other sites, you can find demo pages for styling all sorts of form controls.

We have added many advanced CSS features that let content authors make better-looking sites with less effort. These include experimental WebKit features or early implementations of CSS3. Here’s a quick demo of some of them (you’ll only see the fancy stuff with a WebKit 3 based browser):

WebKit supports multiple columns. This is a test of multiple columns, so it should really lay out in two columns. Multi-column layout is a CSS3 module. And hey, as an added bonus, why not use text-stroke/fill (WebKit extensions) and text-shadow? Those make for a nice fancy heading. And while we’re at it, there’s also border-radius and box-shadow for box decorations.

In addition to the features shown here, many more CSS 2.1, CSS 3, and WebKit experimental features are included. We support CSS Media queries, and lots of background improvements like background-origin and background-clip, multiple backgrounds (since Safari 2, but still only supported by WebKit), box-sizing and more. Another cool new feature is border-image, which lets you make resizable control backgrounds using a single image – there’s some demos in this sample code for the iPhone in the buttons section.

See this Safari CSS reference document for a complete list.

The latest stable WebKit has enabled significantly reduced memory use, compared to the Safari 2 version. We have made many kinds of improvements. Pages containing large amounts of text are stored more efficiently. JavaScript code generates smaller data structures. And most significant of all, we’ve revamped the way we handle the memory cache. The cache is now much better at holding the data that’s truly critical for faster page loading, but less of the data that can easily be recomputed, like decoded image data.

Memory use is something that is notoriously hard to measure. The browser has many caches, and many sites on the live web server. The best way I could find to measure repeatably was by looking at memory use after running through the HTML i-Bench, but your results on other sites may vary. Here is what I saw:

Improving memory use will remain an important focus for future releases.

One of the best WebKit improvements is the availability of Web Developer tools, the Web Inspector and the Drosera JavaScript debugger. I can’t really describe these better than the original blog posts, so here’s some screenshots and links to the original posts: 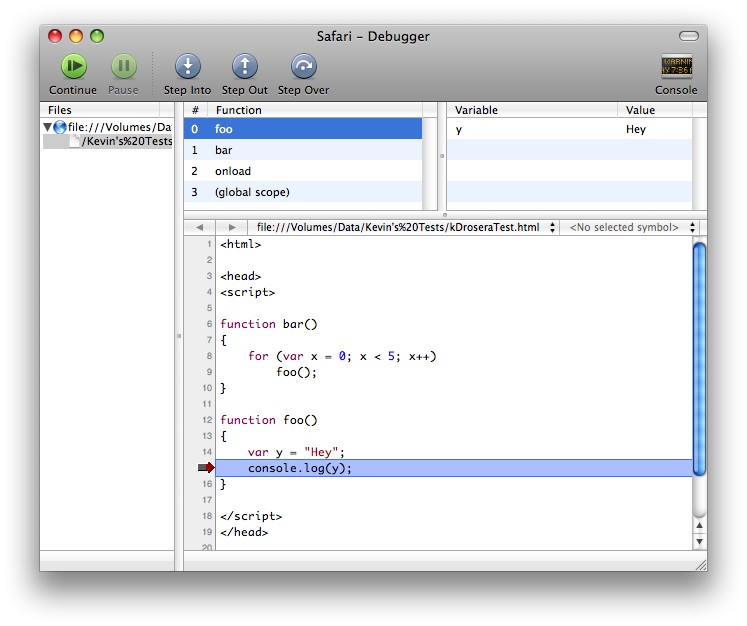 So that’s it, ten huge new features in WebKit 3. Grab Mac OS X Leopard, the 10.4.11 update to Mac OS X Tiger, Safari 3.0.4 Beta for Windows, or your favorite other WebKit-based browser to check them out for yourself, along with thousands of smaller features and bug fixes.